Story of the Gateway

We all know the dangers – Once you start rummaging in the shack. You find all sorts.

Well that happened to me!! Or rather my Father GM0WUP – Along with the DR-610 he came across a DR-M06 and had the bright idea to suggest I add a 6m port to the gateway. 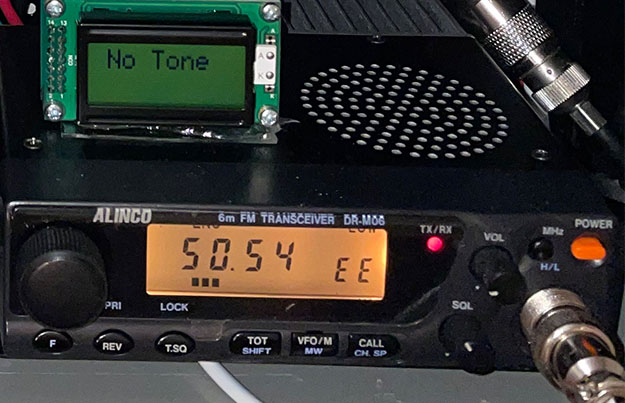 I contacted the RSGB ETCC and they indicated an NoV would not be an issue – so application made I turned to building a second Raspberry Pi CM108 interface system to add the additional port. That was the easy bit, no problems there NoV actually turned up much quicker than I had thourght.

The project came to a screaching hault and I had a massive roadblock.

The DR-M06 had CTCSS ENCODE, But not DECODE.

A Quick appeal for help on Facebook was made and I got a recommendation for a company called CSTech.co.uk who made a CTCSS Decoder kit.

Eureka! We have a solution.

The (completed kit – Yes I cheated) arrived very quickly. The price an incredibly resonable £32.99 at time of writing.

After checking the Service Manual I found the pin for the Official CTCSS decoder and linked this new module into that. It Works First Time!

So now we have Two Ports but the idea of keeping both gateways on a little shelf doesn’t work anymore – It’s going to need a better home.